The Gloucester U17 Gold was my first tournament of the 2019/20 badminton season. A two day event Saturday 3rd and Sunday 4th August 2019

Saturday First event was mixed doubles. Myself and partner, Sophie Watson from Leicestershire, were seeded 5/8 in this event and it was only our second tournament playing together. In our first game we had a comfortable win in the first end 21-10 but after changing ends, the playing conditions were not as favourable as the previous game, so it was a lot tougher, but we came through to take the second end 21-19.

In the round of 16 we came up against the England U16 number 1, Oliver Butler and his partner, Megan Tweed from Warwickshire. We took the momentum from the previous match and won 21-9 21-16.

Next the Quarter Final, which was our toughest test so far. We were up against England Pathway player Charlie Castle and Irish Number 1 Sophia Noble, who were ¾ seeds. The first end started off well and we found ourselves with a good lead. Unfortunately, the tables turned, and we lost the first end 18-21. However, we did not let this knock our confidence. We still pushed on and tried as hard as we could to win the second end. We won the second end 21-19. We were now into the 3rd and deciding set. We were both very tired, but we still believed that we could take the final set and win the match. We fought hard and managed to come away as victors with a 21-18 win in the final end. This was the toughest match we had played together. It was very rewarding after 59 minutes of hard work to come away with the win against a higher seed than ourselves.

This meant that we were through to Day 2 of the mixed doubles!

Next was singles. I had quite a tough group with the Welsh number 1 and an England Pathway player. Although I had an hour’s rest until my first singles game after my thrilling Mixed Doubles Quarter Final, I was still very tired and aching. The conditions of the hall were very poor, the shuttles were flying very slowly, and this did not suit my game, so it meant I had to put a lot more effort in than I usually need to when playing.

My first singles game was against Adil Khan from Wales. Adil had only played 1 mixed doubles match that morning so he had about 3 hours’ worth of rest before he had to play me, so he was a lot fresher than I was. He capitalised on my tiredness and beat me.

My next game was against Isum Arachchige. After my previous match I only had my given 20 minutes rest until I had to play this match. It was tough. I won the first end 21-15 but then lost the second. At this point I was very tired, but I still pushed on, but it wasn’t enough and I lost 17-21 in the 3rd end.

After my 44 minutes of playing against Isum, combined with the length of time I had already played during the morning, altogether I had already played 2 hours and 35 minutes of game play. In my final match I had Joe Scott, an England Pathway player. He did not compete in the mixed doubles and had only played just over an hours’ worth of game time. Joe won the first end comfortably, but I came back stronger in the second, only just losing 18-21.

This meant my singles was over and now I just had to focus on the doubles. I was playing with my regular partner, who I played with last season, Luke Hoult from Leicestershire. We were the 3/4 seeds. In our group we had the Welsh number 1 doubles pair, Adil Khan and Daniel Kite. We came up against this pair first and played some great badminton to take the game 21-7, 21-9.

Our final game was against the toughest group opponents, Joe Howells and Ryan Evans. In our previous match against them in the 2018/19 season, we lost a tough 3 end match against them. We took that game into consideration and used it to give us the energy needed to win the game. We found ourselves behind most of the first game but came back to win it 21-18. We were in high spirits and then we played the second end and won 21-17. This meant we had made it through to the Quarter Final.

In the Quarter Final we had to play another U16 pair. Harry Wakefield and Tighe Crook. They are two very good players, so we knew it would be tough. However, we came through and continued our form to take the match 21-12 21-13.

This meant we were through to Day 2 of the Boys Doubles.

Gloucester U17 Gold – Sunday 4th August. It was great to get through to the second day of a Gold tournament, as I had not managed it throughout the whole of last season.

Boys Doubles was first. In the Semi-Final we had the Irish Number 1 pair, Matthew Cheung and Vincent Pontanosa, who were also the number 2 seeds. We were both still tired from Day 1 but we did not let that affect us. We played very well in the first game and opened a 6-point lead and took the end 21-15. In the second end, we struggled to hold onto our form and lost out 15-21. We were disappointed with this result but knew we could still take the third end. We started strong and found ourselves 13-8 up. This is when the fatigue started to kick in from the day before. Suddenly, we found ourselves 17-19 down and about to lose the match. We took a little time to compose ourselves and found that little bit of extra energy. We then took that match, winning 21-19. We were into the final!

Before the doubles final I had the Mixed Doubles Semi-Final. This was against a pair from Lancashire who have been playing together for 3 seasons compared to Sophie and I only having played 2 tournaments together. We started off strong in the first end and played well all the way to the end and took the first set 21-18. The 2nd end was a lot tougher and we lost. The 3rd end was another tough battle and we found ourselves behind all the way until the end where we bought it back to 20-20. Unfortunately, it was not to be. We lost that end 20-22 meaning that our mixed doubles form was over.

Although we were both very disappointed with the match, we still played well throughout the weekend, bringing home a bronze medal and are looking forward to the next Gold playing together.

Finally, the eagerly awaited boys doubles final. We were up against the number 1 seeds, Sam Jones and Blake Hoang, both England Pathway players. We knew it was going to be tough, but we went in with a positive attitude and tried our absolute best. We played well throughout the match but Sam and Blake were well drilled together and we ended up losing that match 10-21 15-21, which was still a good result and a silver medal, considering neither myself or Luke are on the pathway.

Results from Gloucester U17 Gold can be found HERE.

Overall, I was very happy with how I played throughout the weekend. I am obviously disappointed with my singles but that’s for me to take away from the tournament, to work on for the next U17 Gold in Leigh in October.

On 31st March, I competed in the Loughborough Bronze – Senior, which took place at Loughborough University. I played mixed... read more

Charlie’s Triple win at the 2018 School Championships in Norfolk Saturday I played the U16 Norfolk 2018 school badminton championships... read more

The INFUSION club series range Get an Infusion of energy on the badminton court with this new club series. Featuring... read more

When you GO FIGHT on court you are a winner………….! GO FIGHT one of the new club series range fro Forza.... read more 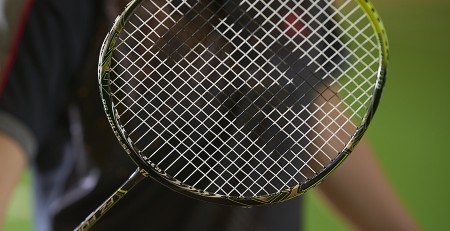 Do you know where can I trial rackets before I BUY one? ForzaWM have rackets that can be tried... read more

Jasmine Owen at the Derby U15 Gold – 09.09.2018 Jasmine kicked off the singles in impressive style winning her group... read more