On the weekend of  30 September, I participated in the Senior Warwickshire Restricted 2018. On the Saturday of the tournament, I played in the ladies doubles with Kiara Henry. Having won our first two group matches fairly comfortably, our third group match was the match which determined who went onto play in the final. After having a relatively slow start to the match, losing the first set to 18, we won the next two sets 11 & 14, booking our place in the ladies doubles final the next day.
On the second day of the tournament, we started off with the mixed doubles, and myself and Andy Wainwright were going in as the number one seeds. Winning all three group matches comfortably, we progressed to the semi finals where we met 3/4 seeds Phoebe Moore and Will Kitching. Even though we we were behind 11-7 at the mid way point of the first set, we pulled through and eventually won the math 21-19 and 21-17, securing my second final of the weekend.

Before our mixed final, Kiara and I played our ladies doubles final against Milly Evans and Phoebe Moore. We started the match well by winning 21-17, however a good change of tactics from Milly and Phoebe meant that we eventually lost the match, 17 in the third. Finally, the penultimate match of the tournament was the mixed doubles final, against Kiara Henry and Chris Williams (an almost all West Mids PC final!). After being pretty much neck and neck in the first set, we pulled through and won the first set 21-18, and the second more comfortably with a score of 21-15! 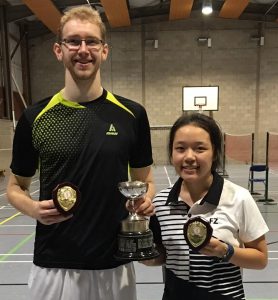 Overall, I was very pleased with my performance at the weekend, and was even more pleased to win the mixed doubles and to be runners up in the ladies doubles! Extremely happy with how this season has started and I’m hoping for an equally successful one domestically!

Forza WM sponsored junior Victoria Liang won Gold in Mixed and Silver in Doubles in Warwickshire Senior County Restricted. Victoria was seeded 1st in both events. Partnering with Kiara Henry, they lost in 3 close sets in the final. In the mixed with Andrew Wainwright, they won all their matches in straight sets.

What made the event special, is as a sponsor I was there, ringside so to speak. I services judged the Mixed Doubles. Stef C-R

Charlie Wakefield took part in the Norfolk Senior Restricted in September 2019. On the weekend of the 28th and 29th... read more

On 31st March, I competed in the Loughborough Bronze – Senior, which took place at Loughborough University. I played mixed... read more

Charlie’s Triple win at the 2018 School Championships in Norfolk Saturday I played the U16 Norfolk 2018 school badminton championships... read more

Rosemary Allen On the 19th-20th October I competed in the Essex Senior Silver. I had the advantage of it being... read more

Harper’s season concluded on Saturday 1st June so I thought I’d update you on his progress and achievements. He... read more

Jasmine Owen – Liverpool U15 Silver – 14.10.2017 Jasmine arrived at Liverpool in good spirits hoping to carry on from... read more